The engine that powers Web, Metaverse and HPC

Jimmie T. April 12, 2022 Oligopolies Comments Off on The engine that powers Web, Metaverse and HPC 24 Views

Here’s how ‘digital nations’ form and why they matter

What The Zuck – A Web3 Metaverse Roadmap

Will the next pandemic start with chickens?

Founded in July 2021, DeepSquare is a registered Swiss association led by project managers and co-founders Diarmuid Daltún and Dr. Florin Dzeladini. DeepSquare aims to provide a true decentralized sustainable alternative to the cloud oligopoly, respecting the original spirit and values ​​of the web and beyond. The founders have a background in artificial intelligence: machine learning and deep learning, cloud and hosting, large-scale high-performance infrastructure and architecture, sustainability, banking, and international sales and marketing.

The high-performance computing market size is expected to reach over $55 billion by 2030 – a CAGR of 7% through 2030, driven by the surge in computing-intensive projects of AI, ‘IoT and blockchain. In addition to this somewhat specialized market, cloud hyperscalers today deploy ~76% of new compute capacity. DeepSquare’s goal is to empower the business cloud with an interoperable heterogeneous grid that is decentralized, community-driven, transparent, and fair.

Alongside the world-class team, DeepSquare has attracted a network of advisors with expertise in crypto, blockchain, economics, supercomputing and sustainability. DeepSquare has developed a comprehensive High Performance Computing (HPC) and Cloud (Cluster Factory) stack to enable the association itself and like-minded universities, research centers and research centers [super]regional cloud providers to join the ecosystem and add HPC as a service to their portfolios

“Innovators looking to create something different want to deviate from traditional practices. Imagine having only one grocer in your town, wouldn’t that be weird? Why should people be content with certain aspects of their lives being monopolized? Freedom is something important to maintain, we don’t need to create more oligopolies– Dr. Florin Dzeladini

DeepSquare is poised to disrupt the cloud industry and challenge the status quo by turning everything upside down. While hyperscalers rely on closed, centralized systems, DeepSquare promotes transparency and operates in a decentralized, open network centered around a blockchain computing protocol.

This inclusive, community-led project offers all participants the opportunity to get involved on their terms. One of the main goals of the DeepSquare project is to have fair and transparent pricing on the DeepSquare Marketplace as well as the underlying computing resources opening up the once exclusive world to innovators from all corners of the earth.

While HPC in particular solves some of the world’s most complex problems: training AI for autonomous vehicles, bringing the Metaverse to life, developing disease treatments and vaccines, and making blockbuster movies, this increased computing demand results in a potential additional burden on our environment. . DeepSquare is focused on sustainability, providing a model for environmentally friendly practices and technologies to minimize energy footprint, utilizing liquid cooling and promoting heat reuse. 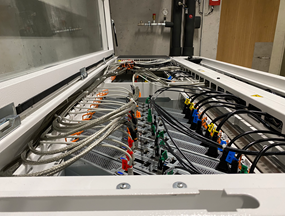 “DeepSquare is a multifaceted project, with a talented and passionate community and ecosystem. Together, we deliver on the original promises of the web, creating a decentralized and transparent alternative to big tech, allowing everyone to retain ownership of their data..” – Diarmuid Daltun

In late 2022, as its own blockchain on an Avalanche subnet, the DeepSquare compute protocol will allow third parties to join the grid without trust, provide transparency, and ensure that all participants play by the rules.

The project has raised over $2.9 million to date from over 300 investors and continues to grow. DeepSquare has already made an impressive library of applications available to support AI, simulation, and rendering workloads. DeepSquare partners and integrates with complementary blockchain projects such as Filecoin (for long-term storage as an alternative to S3) and is preparing to work directly with several other NFT and Metaverse projects across multiple blockchain ecosystems.

This Week in Techdirt History: September 11-17

from as it was department Five years ago This week in 2017, Comcast sued Vermont …